A bread story . The symbolism and importance of bread throughout our known history as humans is significant. A symbolic foodstuff of international scope, bread is the quintessential human food. Its history goes hand in hand with the history of the human race itself, the simplest form of food perhaps in the history of everyday life and eating. It connects people to culture, to tradition, and sometimes to religion.

My research came up with this gem as well: Throwing of the bread . . . “During imperial Roman times, bakers, known as “pistories,” celebrated the Vestialies, on the ninth of June to Honor the goddess Vesta. In the Ovid, Roman poet Ovid tells of the worship of Jupiter the Baker. Bread played an important role during the attack of Rome by the Gauls in 287 BCE. The Romans prepared small loaves which they hurled at their assailants. The Gauls had to conclude that Rome was so well-stocked that they could withstand a very lengthy attack indeed, if they could afford to use food as a weapon. The Gauls abandoned their siege; the Romans built a temple to Jupiter in gratitude.” (Source: Encyclopaedia of Food & Culture, 2003 Gale Cengage

A glimpse into the life of our friend Meraai, the baker from Buitekant Street, Swellendam.

Meraai (Marietjie) is passionate about baking bread. Specifically, bread made in its purest form using only flour, water, and salt. She uses these three humble ingredients and transforms them into one of the most delicious and comforting foods, sourdough bread. “Slow bread” requires a sourdough starter (or levain). Levain is a mixture of water and flour that has been converted into a leavening agent through the process of fermentation. It can take up to three days of preparation before the breads are ready for her wood-fired oven. She prefers using stone ground flour which she combines with love and care, passion and total commitment.

Stone milling is the way flour was made for thousands of years before the age of electricity and mechanisation. There is a marked resurgence in the use of stone-ground flours as it thought to be more nutritionally sound because of the germ and bran. These are the parts that hold the flavour, too. In fact, stone-ground flours can taste too strong for some tastes as most people are used to baked goods where the flour stands in the background.

Meraai tells us a little bit about her daily baking experience, and about some of her adventures in bread making:

What a fulfilling moment when those loaves first come out of the oven! You hear them talk in soft crackling whispers… You smell the full flavour of quality stoneground sourdough. You touch it, break it, eat it… You are carried into an experience that involves all of your senses… This is the song of wheat.

This is Klonkas. collecting dead, dry wood once a week, from the surrounding forest for our wood-fired oven. THÍS is where our baking proses starts up for the week.

During the Covid lockdown last year, Meraai found herself stranded in Kigali, Rwanda for 7 months with family. She used the time there to teach local residents the art of bread baking:

The sun is peeping over the horizon in the country of a thousand hills. A multitude of birds are chirping and singing in the 10m tall bamboo bush in front of me. How blessed I am to enjoy this EVERY morning, with a fantastic cup of Rwandan coffee, made by my hosts Pallua or Rudi. Thank you, God of Life! What a privilege! We faced quite a challenge with a small kitchen, small work surface, no special tools, no stoneground flour, and a small (not very reliable) oven. About seven people asked me to bake some sourdough bread for them while I was here. Since I just love baking bread, I was really excited about this. However, as the dough was waiting in the pans, I realised the oven was not heating! This oven later broke a second time while I was there.

Tue Feb 16 , 2021
From a very young age I always felt for me to be a real artist one needed to work from life. (Plein Air) “A distant rumble of thunder, cumulus clouds gather swelling, growing in momentum on the horizon on a farm in the hot Northern Cape.Delighted by the light on […] 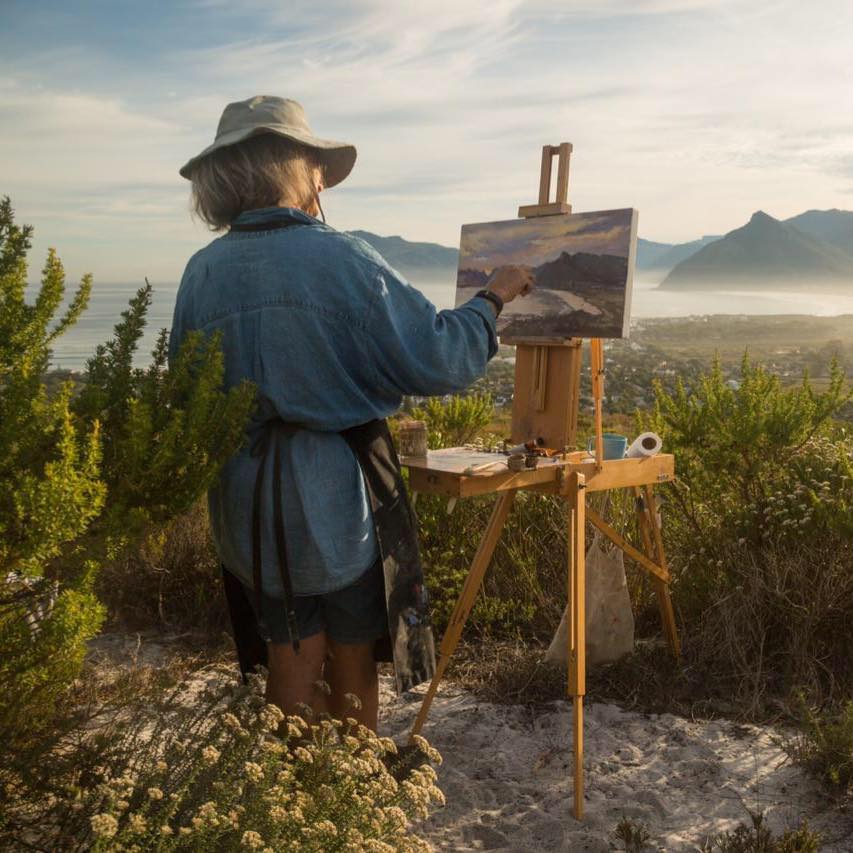