67 Years is a long time to recall faces, names and  incidents from so long ago.  But I do remember sitting in the passenger seat of a large lorry with 3-month-old Ashy sleeping peacefully in my arms.  We were driving along the wide gravel roadway leading out of Kibbutz Neot Mordechai.  I could hear laughter and shouts of “Shalom”, and “Todah” (thank you,) and  Kol tuv (“good luck”) from my husband Jos and our other group members waving goodbye to the Kibbutzniks working in the fields as we drove past – long neat rows of ploughed land, green shoots already emerging.  I could pick out buildings that had introduced us to kibbutz life – the large chadar ochel (eating hall); rows of prefab single rooms which had been our homes during the year on the kibbutz; the shower room giving us hot solar-heated water on demand.  Well-built brick buildings with pretty gardens, the houses of the kibbutz children.  I waved to Rachel , my first “boss” , hard at work in the abundant vegetable garden as we drove past – my working place for  a few months.  And in the background the long roof of the shoe factory.

Neot Mordechai, like all kibbutzim, needed added income from some form of industry.  It had, and still has, a shoe factory.  In our first month each of us were given knitting needles , wool and a simple pattern, and we set about knitting slippers for ourselves.  Some of the boys insisted on doing their own knitting.   Eventually completed, the factory attached our knitted shapes to shoe soles, and we each owned a pair of warm slippers for winter.

I remembered my first place of work on Neot.  We had recently arrived in Israel in November, a very wet and very cold month.  I was sitting with Dalya, a member of our group- in a huge barn, huddled as close as possible to the oil heater between us, trying desperately to keep warm.  Our work was to bind  slips of tender marketable grape shoots  onto the root stock of a  hardy choice of grape for future planting.  Once bound, the new stock was dipped into liquid wax to firm the grafting process for future planting.  We did this work for a very cold month!

But then spring came, and with it the sun, and walks on Shabbat (Sabbath) mornings into the foothills of the nearby hills, where we picked bunches of wild poppies and baskets of edible mushrooms.  Tirtzeh, wife of a  colonel in the Israeli army, had become a dear friend on Neot.  My introduction to fried onions and mushrooms on freshly-baked kibbutz bread was not the taste of grilled steak I had been promised,  but it became a delicious favourite.

A glimpse of the wooden cots outside the babies house reminded me of my experience earlier in that year of being driven in the early hours of the 29th May to the maternity hospital in Tiveria – a one-time Monastery.  My nine months of pregnancy were up and having arrived in Tiveria (Tiberius) I had to say goodbye to Jos as huge iron gates clanged shut behind me.  There I was, alone in a strange environment with stranger sounds echoing around me.    A tall, friendly nurse claimed me.  From then on I was in the care of my Swedish midwife, who couldn’t speak a word of English or Hebrew, and I certainly couldn’t speak Swedish.  But we got on famously, and Yoash Ilan (Ashy) was born about four hours later, with only my cheerful midwife in charge of proceedings.

That evening I walked onto the wide balcony overlooking Lake Kinneret.  It was a beautiful sight.  I felt very blessed.  The next day Ashy and I returned to Neot.

View of the Kinneret (Sea of Galilee) in the city of Tiberias. Photo by David Cohen/FLASH90

The northern part of Lake Kinneret (Sea of Galilee) near the Golan Heights. Photo by Moshe Shai/FLASH90

One day while I was busy with Ashy in the baby house, I was called that I had a visitor!  My visitor was obviously a religious person from the way he was dressed – black suit, ringlets on either side of his face falling from the hat on his head.  He had come to collect a parcel we had brought from his family in Johannesburg.  There ensued a series of errors on my part as I attempted to welcome  him.  My Yiddish was faulty, and my knowledge of religious etiquette seriously lacking.  My poor visitor was definitely  agitated by the errors I made as I attempted to welcome him and find a place for him to stay while we waited for Jos to come from work.  My efforts at hospitality were a disaster until I decided to show him around the kibbutz.  Up in northern Israel the River Jordan starts from waterfalls descending from the heights of Mount Hermon  in Syria, on Israel’s northern border.  It runs as narrow rivers on its way to the Sea of Galilee, Lake Kinneret.  One of these rivers forms the border of the kibbutz.  When our visitor saw the Jordan he was overcome with emotion.  “Is this the Jordan?” he kept asking me in Hebrew over and over, as he stripped off shiny shoes and socks, rolled up his trouser legs, and waded into the cold water.  He threw handfuls of water into the air, and started blessing everything around him, including Ashy and me,  I was surely forgiven for my recent errors and I know his blessings were certainly well-received.  Jos soon came and rescued the situation.  They found a room for him with a mezuzah (holy scroll) on the door for him to sleep in; he ate a boiled egg for breakfast, and early the next morning returned to Jerusalem with his parcel.

As with all kibbutz members, we took our turn in the “services”.  I worked for a month in the laundery, where working and formal clothes were washed, ironed and mended where necessary, and sorted.  This was the place where one could pick up all the local gossip.  Every member worked a week in the kitchen with a further week in the eating hall.  Security was another service organized by the security branch of the kibbutz.  The men did guard duty on the perimeters of the kibbutz, while the women checked on the sleeping children in the childrens houses, and took time to deliver bags of clean laundry to the various children’s houses for the following day’s  use.

Some evenings the kibbutz had organized entertainment.    There would be an occasional movie, and musical evening were very popular with the kibbutzniks.   The kibbutz music library had a wide choice to please musical tastes – jazz, classical, opera and vocal.  One night I remember a rather raucus joke evening.

We would meet every evening in the chadar ochel (eating hall) for supper, showered and dressed in clean casual clothes, and scan the notice board to check on work schedules for the following days.  Most time our chaps worked either with the fish ponds or in the fields.  Jos worked the whole year with Reuvain, the man in charge of the agricultural section of the kibbutz, and learnt a great deal from him.    We had a good laugh when Jos eventually solved Reuvains problem with the “putakov” on his tractor.  Jos asked everyone who might know what and where was a tractor’s “putakov”?  Eventually he worked out that it was the tractor’s “power take off!”  Reuvain also told Jos that cotton had been grown in the area we were going to in biblical times.  Jos took that suggestion and grew cotton at Tzora when we eventually got there.

Eventually our year at Neot was coming to an end, and our group decided to do something special as a big “thank you” in appreciation of the very wonderful year we had spent with these amazing people who had made us so welcome and befriended us with genuine warmth.  And knowledge.  We staged a tableau based on the Biblical “Valley of Dry Bones” which was very well received.

We were sorry to be leaving Neot.  We had been very happy there,  fitting in so well with kibbutz life although its members were a good few years older thus us.  What is it about South Africans that makes us so popular, fitting into new situations with such energy and good humour?  We had been earnestly requested to stay on at Neot, but we remained committed to the original arrangements.  We had learnt a lot about the actual running of a kibbutz and what was expected of its members.   But more than that we understood the pride of achievement in this unique way of life – of co-operation, of the efforts of all its members according to each one’s ability, and the co-operation of the members to make the system work.  And in those early years the collective way of life, including finances, was essential to ensure the development and security of the new State of Israel.

The changed sound of the lorry’s wheels on tar alerted me that we had driven through the kibbjtz gates and turned left onto the main road which would take us approximately 130 kms southward to our permanent home in Israel –  the five year-old Kibbutz Tzora.

I glimpsed neat rows of green leafy grape vines.  Then suddenly the year we had spent at Neot Mordechai disappeared from my view.

Dear Debbie
We trust you had a wonderful 90th in June and thank you for sharing your story with us. You are special.
Team Village Chat

The story of my connection with horses - by Debra-Leigh Möhle

Sat Jul 17 , 2021
My attraction to horses began before I can remember, my mother told me I started asking to ride very early on. My first riding lesson eventually happened when I was 7 yrs old, I lived and dreamed horses in every possible moment for the next 7 years. Growing up in […] 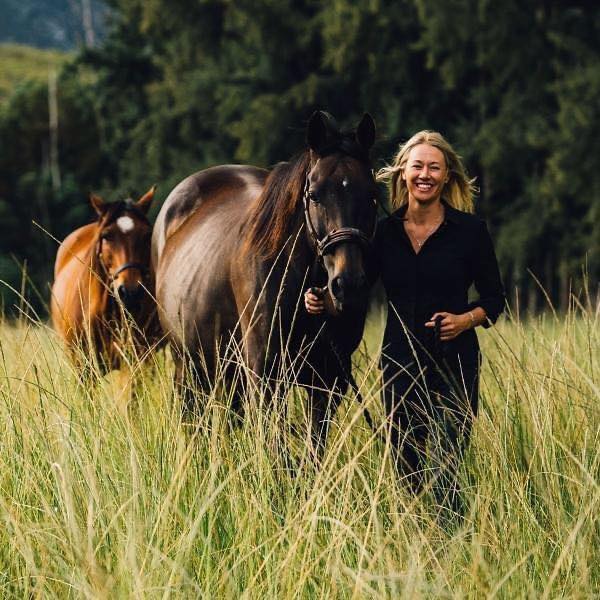